I don't usually eat frozen entrees, because they are often (1) sodium filled, (2) weird texture when microwaved, and (3) expensive for a small portion. Even at Trader Joe's, where the frozen offerings are some of the best on the market, they can still suffer from these issues.  I saw this MorningStar Farms Japanese Soba Noodles on sale at Harris Teeter  for $3.50 (down from $5) so I decided to put it to the test.

This soba noodle bowl features vegan beef, edamame, sugar snap peas, bamboo shoots and red bell pepper and is tossed in a ginger garlic sauce. The sauce was tasty, although was light on the ginger, and actually not overly salty (although it does contain 660 mg of sodium per container). The texture of the noodles was good, but any longer in the microwave and they would have been hard and chewy, so follow the instructions to a T. The veggies were a nice mix of what I'd want in an Asian style bowl, and the snap peas kept their crunch! The vegan beef pieces were a lot smaller than in the picture on the package, but they were delicious and I wish there was more.

The verdict: Better than I expected on all fronts. Pretty tasty and good in a pinch, but I would prefer to make a homemade noodle entree. I would purchase again only if on sale, because frankly $5 is too much! 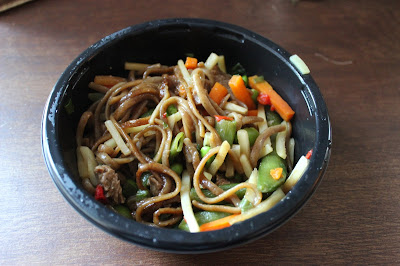 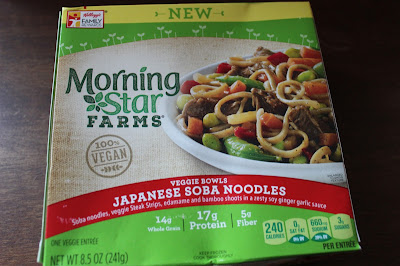 Labels: frozen Morningstar ready to eat Something I Tried vegan