The vegan cookbook that shaped me back in the early 2000's was Sarah Kramer's and Tanya Barnard's How it All Vegan!. From savory to sweet it had recipes that recreated my favorite dishes. I don't think I could have gotten through those first few months and years of plant-based eating without knowing how to veganize everything, junk foods too.

I don't often buy cookbooks nowadays because as a vegan blogger, I spend most of my time having a browse on Twitter and the blogosphere for inspiration. However, I'll never forgot how essential How it All Vegan! was to my vegan journey, and I see a lot of value in being able to sit down and flip through a book with recipe caterogories with bright color pictures. I felt empowered to see how many substitutes there were for eggs in their handy substitution guide and it reading the book was really an education for me. I believe new vegans and OG vegans alike could make good use of this book, because it is provides a refreshing take on some omnivorous favorites. Plus, it never hurts to support vegan enterprises...planteaters gotta bring home that bacon too.

I was sent The Dirty Vegan Cookbook by Catherine Gill, an author and holistic chef, to go wild with. I was sent the book gratis, but this is not a paid review and I am giving my own honest opinions. When I received the book I loved the look and feel of the cover. I enjoyed the pre-amble and the ability to get to know the author and her vegan story a little more. The vegan pantry guide, an essential to any great vegan cookbook, was thorough and witty. The cover not only looked nice, but it had a great, soft feel. The inside pages were teeming with bright pictures of delicious food, and it looked as though at least 3/4 of the recipes had an accompanying image. To me, this is important not only because we "eat with our eyes", but also it helps to see what the end product should look like so you know how to compose the components of the dish.

A lot of people assume vegans are eating the cleanest, healthiest diets out there. Maybe that's true of the raw vegans, but in this book you will discover the dirty side to veganism. I approve, considering most of my blog posts of things I like to eat are not buddha bowls with oil-free dressing, but rather vegan versions of some stick-to-your-ribs comfort foods. Many of the recipes in The Dirty Vegan call for replacements for meat and cheeses. These aren't items I usually have in my fridge, so most of the recipes would require a special trip to the grocery for me. Given that, the other ingredients in the recipe are usually pantry staples. If you're a plant-based eater who really likes the taste of seitan and other veggie meats over tofu, beans, and tempeh...this will rock your world!

I decided to make one savory and one sweet dish from the cookbook. Read on for my notes on the recipe process itself and the taste! 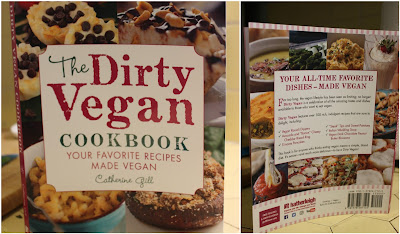 For the savory dish I opted for the Stuffed Cabbage Rolls. Cabbage has long been one of my favorite foods, and I love a good cabbage roll. These are filled with vegan ground beef crumbles and rice and baked in a marinara sauce. Heavenly!

The Process: I was struck by how simple and easy to follow the recipe was. The only challenge was the technique to gently pull off the leaves of the cabbage head without ripping them. The stuffing and rolling was a breeze, just be prepared to get your hands a little dirty courtesy of The Dirty Vegan. The recipe should have yielded 12 rolls, but depending on the size of your leaves (which vary layer by layer in the cabbage) and how much you fill them, you may end up with more or less (I totaled 9). The hardest part was waiting for them to come out of the oven.
Taste Verdict: Since the recipe doesn't call for much seasoning, make sure you use a really nice and flavorful marinara sauce for the baking so that it infuses a rich flavor. Alternatively, this recipe lends itself to a little creativity with the spices when you sauté the beef to suit personal preferences. The flavor of the finished product was out of this world. I sprinkled on some nutritional yeast and that was perfection. 10 out of 10 from this cabbage lover.


~~~~~~~~~~~~~~~~~~~~~~~~~~~~~~~~~~~~~~~~~~~~
Now onto the sweets...Whatever the baking equivalent of a green thumb is, my sister has it. While I, on the other hand, am challenged in the baking soda department. I tried out the sweet recipe from The Dirty Vegan Cookbook while I was visiting my sister a few weeks ago to ensure the success of this recipe. I opted for the Coffeehouse Style Pumpkin Cream Cheese Muffins, which are a cheeky rendition of the famed Starbucks originals.

The Process: While the recipe did not call for any particular way of mixing (I assume it was by hand), my sister insisted we use her KitchenAid Mixer. Cue Iggy Izalea because we are fancy. The three-part recipe consisted of first making the vegan cream cheese filling, making the batter, and then filling the muffins with the cream cheese. The cream cheese was a breeze, taking just a few minutes to perfect the sweet and creamy icing. The muffin batter was also easy to make, although the recipe omitted when to add the sugar, but my baking whiz sister knew what to do. I think I would have forgotten it myself. Lastly, the filling of the muffin was a challenge. My sister and I were struggling to scoop it into the well in the center. So we decided to fill a piping bag and pipe it in with a large tip. You can see from the second pic below the difference in outcomes: the messy ones were scooped in, and the prettier ones were piped. You could really tell the difference in the two methods when you cut each muffin in half and looked at the distributions of the cream cheese. 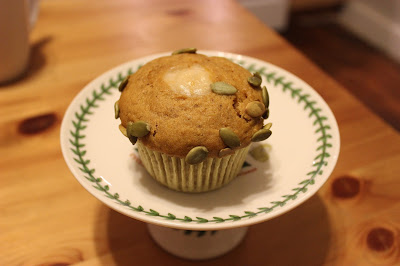 Taste Verdict: These muffins stuck to the liners quite a bit. The texture was delicious, and honestly not overly pumpkin-y. The pumpkin puree brings a lot of moisture. The cream cheese filling was good, but I think I would have preferred some other distribution, like a swirl on top...however this is just a personal preference (and besides the Starbucks version is just like this).

I can't wait to try some of the other recipes in The Dirty Vegan Cookbook, first on my list is in the Franks, Beans, and Biscuits Bake. Then the vegan ravioli dippers and fondue made with beer!