Texas VegFest 2016 was held on Saturday at Fiesta Gardens in beautiful Austin, TX. Let's get down to business, here's what I nommed on:
Seed Catering Co . I ordered the 'poke bowl' with gingery-soy golden beets on a bed of jasmine rice. This was a little sweet and salty and the beets were an awesome vehicle for this type of sauce, soaking it all in. I also got a BBQ jackfruit slider with kale slaw. Both dishes were amazing quality, and had amazing flavor. There is nothing subdued about these bites!
I have been craving a sample of the new all-vegan Mexican food truck in Austin, since they made a splash with vegans all over social media. Luckily, the Cool beans truck was parked at the VegFest! I rarely will stand in a line, and this was the longest line on Saturday, but I faced my fears...and it was well worth it! For $5 I scored a sweet potato tamale, charro beans, and washed it down with a $2 hibiscus tea. 'twas amazing.
Buddha's Brew was at the festival with their kombucha on tap. I got the tangerine and sea salt flavor. No joke, you will be getting your electrolytes because this tea is actually salty...in a good way, if you like that kind of thing.

Despite all my trips to Austin, I never have visited the Mr Natural brick and mortar (I think because I always remember them on Sunday, when they are closed). They made an appearance at VegFest this year and had both sweet and savory offerings. I went for the Bavarian Cream cone pastry with pecans, because I have never had something like this! The pastry was crispy, and the cream was light and slightly sweet (which was perfect for the warm weather and didn't weigh me down). The cone was drizzled in a delicious chocolate sauce and dipped in chopped pecans. Yum.
Later in the day I stopped by the  Fat Cats stand and got a vanilla cake doughnut with matcha icing to-go. Yay for green donuts! It was absolutely delicious, but my recommendation is to eat it then and there (no matter how full you might be from VegFest!), because in the heat the icing clung to the bag instead of the doughnut!


After an epic Texas VegFest 2016 I still had a day and a half in Austin...I also got to eatin' some more:

Bouldin Creek is a cafe/coffee shop that must be at the top your vegan tour of Austin. The vegan options are very numerous at this vegetarian establishment, and I am always very impressed by the portion size and quality. This time around I ordered the Wanna BLT, served on chewy sourdough with housemade tofu bacon, lettuce, tomato, vegan basil aioli. The sandwich and side of chips and salsa was awesome!

Because I didn't catch them at VegFest, I made a special trip to the all-vegan Imagine Tea Leaf  trailer. The menu is all tea drinks, and I ordered the spicy chai with almond milk. It was delicious, but I could even go spicier with my chai! It took several minutes to get my order, so this might not be the spot to stop if you're on a rush to work (but seriously, sit at the picnic tables, relax and enjoy your beverage!) Next time I'll try a Cha-ffee, a mix of black tea and herbal coffee because it sounds like something I've never had!
For Sunday brunch I stopped at Mother's Cafe.  It opens at 10am, which seems to be one of the earlier vegan friendly weekend brunch services in town. I ordered the veganized migas: tofu scramble with tortillas, peppers, onions, tomatoes, mushrooms, covered in ranchero sauce with sides of black beans and breakfast potatoes. The flavor was spot on--I just would have wanted 3 times the amount of ranchero!!!
Wheatsville Co-op . I wish I could live here. Not Austin, silly...Wheatsville Co-op. Seriously the co-op is my favorite grocery store of all time. This trip I stopped into the Lamar location, which is slightly smaller than the Guadalupe location near the UT campus. But just as amazing. I got some Popcorn tofu, which was so well seasoned. The Red Rabbit Bakery pastries they usually carry closed and stopped making doughnuts, but Wheatsville has appeard to take over with their recipes. I had the coffee glazed yeast doughnut, and oh my word it was good. I will be dreaming of it until my next ATX trip. Right next to the deli and coffee bar is a self-serve kombucha tap station!!! You get a 16 oz pour for $2.79....which a steal as far as kombucha prices go. On tap was the local brand Kosmic Kombucha and I got the "green" flavor: kiwi, pineapple, coconut, wheatgrass, sweetened with agave. It was really mellow and sweet. It's a great choice for those that don't like this fermented tea too sour and fizzy.
I popped by Kerbey Lane Cafe for a light lunch. I ordered the Vegan Queso appetizer...I'm not sure what I was expecting, but I think vegan cheese (Daiya or something noochy). This seemed to be a spicy bean dip...delicious, but it definitely threw my taste buds off. Oh, and did I mention it was spicy, and served with even more spicy salsa...I really could have used some guac to cool down. 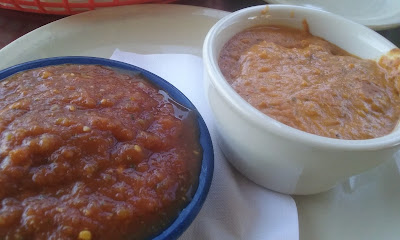 I also had time to visit the Conscious Cravings food truck in the South Austin Trailer Park. Maybe it was an off day, but the service was not very friendly. My verdict, still go for the food...it's tasty and filling for the price. I ordered the tofu "egg salad" on a spinach wrap...I loved all of the flavors especially the nice punch of the dijon that comes through.
I also spent an afternoon at the new taproom/patio at Live Oak Brewery which has vegan friendly beers (see Barnivore for their smart-alec comments here).  It was such a cool outdoor space for a sunny day!
Labels: Austin Tonight I Dined vegan
Location: Austin, TX, USA